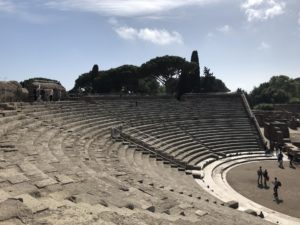 The amazing archeological park of Ostia Antica is the perfect day trip from Rome. Covering a vast area, this fascinating Ancient Roman city has fewer crowds than other sites, such as Pompeii near Naples, and is much closer for those staying in the capital city.

It is easy to visit the park, even as a half-day experience. Ostia Antica is a treasure trove of history and culture just waiting to be discovered either as a couple, with children, or even if you are traveling with a group. The site has lots of wide lanes and open spaces as well as a fair amount of shade provided by the majestic canopy pines dotted throughout the ruins.

The official website explains the origins of the site, saying: “According to tradition, the king of Rome Anco Marzio founded Ostia around 620 B.C to take advantage of the salt pans at the mouth of the Tiber river.

As of now, the most ancient finds however have been from later, specifically from the second half of the 4th Century B.C….” with the discovery of a small defensive fortress used to protect Ostia as well as Rome.

During the 2nd Century B.C. when Rome completely dominated the Mediterranean Sea, the town activities focused around the river port and trade. “By the end of the Republic era, Ostia was a thriving commercial center…”

A visit to the archeological park of Ostia Antica is like traveling back in time thousands of years. You can admire the theater, forum, temples and baths as well as extensive apartment buildings, many with more than one floor. 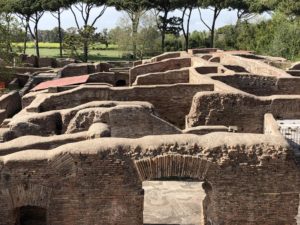 Learn about the different lifestyles of the Romans depending on whether they were slaves and peasants or the rich and elite of Rome. We recommend a short stop in the Ostiense Museum to see the fascinating statues recovered from Ostia Antica as well as other nearby sites.

If you see stairs, climb them! You will be rewarded with a new perspective from the various overlooks such as over the beautiful mosaics and tile work of the baths. Be sure to climb to the top of the theater as well so you can sit at the top and imagine yourself as a spectator to the Roman events that took place there.

At the far end of the park is the Insula of the Muses and Garden houses and beyond Porta Marina there is even an ancient Synagogue  a testimony to the multi-ethnic and religious population of this vibrant city over the millennium.

Getting to Ostia Antica from Rome

Ostia Antica is located just 25 km from the heart of Rome and just 8 km from Fiumicino Airport and is on the outskirts of the modern day town of Ostia.

If you are coming from the city of Rome, the easiest way to reach the site is by minivan hire with an English-speaking driver that has been arranged ahead of time.

You can also easily plan a stop either on your way to or from Fiumicino Airport. For example, after pick up from an early flight arrival you can stop in Ostia Antica for some sightseeing before your driver takes your Rome hotel in the afternoon for check-in, which is usually 2pm or later.

Or if you have a late flight out of Fiumicino, you can spend the day enjoying the park before your driver takes you to the airport. The park can also be visited as a shore excursion from Civitavecchia, about 1 hour away, for those who have perhaps already seen Rome or want to avoid the hassle of going in to the city.

Planning Your Visit to Ostia Antica Archeological Park from Rome 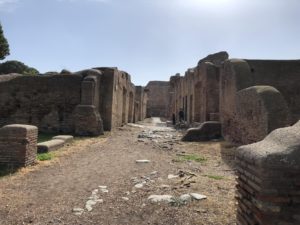 There are several different ways to visit the archeological park of Ostia Antica. The first is as a self-guided visit. For a small fee of €2, you can purchase a map at the ticket office.

The map shows the main street that runs the length of the town, called Decumano Massimo, and the smaller cross streets that lead to other various sites, which are all numbered.

It also shows five different itineraries to choose from (or combine) depending on what you want to see and the amount of time you have at your disposal.

For those looking for more detailed information, audio guides in English (and several other languages) are available for an additional fee at the ticket office, and each of the sites is marked with a number so you can listen to a short explanation as you go at your own pace.

The best way to visit Ostia Antica, for those who really want to understand life as a Roman 2000 years ago, is to have a guided tour from a wonderful English-speaking guide. A guide can customize the tour for you, giving you interesting details and information as you stroll along through the sprawling park together.

Is Ostia Antica Fun for Kids?

Ostia Antica is one of the best sites to visit from Rome with children. After days spent in crowded churches and museums while being bumped by strangers and death-gripped by nervous parents, Ostia Antica provides the perfect respite for children and their families.

It offers tons of space, cool things to climb on, very few roped off areas, a huge theater to explore, a café filled with snacks and gelato and a gift shop selling kid-friendly souvenirs like Roman soldier helmets and reproduction Roman coins.

Ostia Antica was once a large city, with the population reaching an estimated 50,000 at its peak. The surface area to cover is quite large and the roads and paths have uneven surfaces and some can be difficult to walk on, especially for anyone with mobility issues.

We recommend wearing comfortable walking shoes, clothing with layers, sunscreen and hat, as well as bringing small snacks and water. For your convenience there are public restrooms at the entrance and half way through the park next to the gift shop.

There is a restaurant and café with inside and outside covered eating area as well as fountains for drinking water located in several points throughout the park. Plan on lots of walking and a visit of at least 2 hours to be able to see the main points of interest, with more time allotted if you want to try to see most or all of it.

Ostia Antica is open every day except Mondays and on January 1st and December 25th. The park opens at 8:30am throughout the year.

You will be happy to learn that Ostia Antica is free for all children below 18 years of age. We highly recommend bringing valid ID showing age for any teens that look like they could be 18. The entrance fee is €10 for adults. Youth between 18 and 25 from the European Union have a reduced ticket fee of €2. Please note that ticket prices can vary during special exhibits.

Some tours of ours