On April 6th, 2009 a tragic event occurred in the Italian region of Abruzzo: a big earthquake caused massive destruction and many civilian deaths in the region’s capital, L’Aquila, and the surrounding area.

It’s hard to imagine, but still today much of the city is a big construction site.
That same year Italy was chosen to host the G8 Summit. The area picked for the meeting was La Maddalena, a small island just next to Sardinia which is the second biggest Italian island in the Mediterranean Sea.

The earthquake changed everything and the Italian Government, led at that time by Mr. Berlusconi, decided to move the meeting site from La Maddalena to L’Aquila.

The aim was to shine a spotlight on the dramatic event that affected the region and the city.
The 35th G8 Summit was scheduled to begin on July 8th, so they had only two and half months to redo all the plans.
This was a very short amount of time because they had to find a secure and big enough site to accommodate so many heads of state and organize all the security.

At that time, I was in touch with Rome’s American Embassy through a friend who was also a bodyguard.
So, at the last minute, I received an unexpected call to join them just a week before the event, although most of the hired drivers and other staff had already started a month before. I accepted right away!

I arrived in L’Aquila a few days before the event began and I was told to go to a hotel located on the west side of the city, right outside the red zone, an area forbidden to everyone because of the possibility of aftershocks and buildings collapsing.

This hotel, which has since changed its name, was being used by the American entourage such as the FBI and the White House staff.
I felt so excited because I understood the importance of this mission.

I thought that I would also be staying at this hotel, but it was already fully booked and because of the earthquake, there were no more available hotels close by, therefore I had been booked at a ski resort up in the mountains.

Once I stepped inside this hotel in the mountains, I realized that it was full of police officers and security personnel and, although I had never carried a gun in my life, I was surrounded by hundreds of people carrying not only guns but also automatic assault rifles!

The briefing before the Summit

In the morning I received a summons to go to the hotel serving as the American headquarters for a briefing led by the FBI, and they gathered a group of us in a meeting room for a sort of day class.

The man in charge, which was a relatively young and soft spoken but at the same time a determined instructor, explained that our task was to be part of the Presidential motorcade.

It came as a total surprise to me! He was talking about the American President’s security, and nothing would be left to chance.
At a certain point, after the instructor said that we should never leave our position in the motorcade, I asked a question about the possibility of staggering the alignment of the cars in the motorcade to have more visibility in case of danger.

He responded very calmly saying: “There is no reason at all to expect trouble. Therefore, we won’t drive fast, and in any case, nobody can leave his position in the formation, this is not an American movie!”

He also said we were never allowed to stop for any reason until we had reached our destination, so I didn’t ask anything else to avoid another annoyed reply.

In the second part of the briefing, the same guy assigned us our car number signs to place in the car window so our passengers could find the right vehicle.

I was given #4 which meant being the fourth car after the black presidential Suburban.
Then we received an incredibly detailed 20 minutes explanation on the procedure for approaching the presidential helicopter.

We had to open our car doors and ensure that the paper sign number was very well affixed to the car window and clearly visible. He was very precise, explaining how to tape down all 4 corners correctly.
At that point, I thought that spending so much time on such insignificant details seemed like a waste of time.

The day after was the big day because Obama had already landed in Rome and would be arriving in L’Aquila by helicopter for the G8.
We left early in the morning for a meeting at the American headquarters, then at 10 am we all drove together to the small L’Aquila airport and we arrived there two hours before Obama was supposed to arrive.

The same officer from the day before guided us to park all cars in the assigned positions, repeating the same words, again telling us to make sure that all signs were visible and well attached and wait for his order to start our engines.

I parked my car in the right spot and I attached my sign with two pieces of tape because I thought it was more than enough.
Suddenly, just like in the movies, a green Marine helicopter appeared behind the hills followed by a second one: in one of the two was the President, but nobody knew yet which one.

We got the order to turn on the engines and stand by ready next to our cars.
The President was the first to leave the helicopter and all the other passengers moved immediately after him, almost running toward their assigned vehicles.

I quickly opened all doors, when suddenly the unexpected happened: my sign was whipped out of the car by the strong wind caused by the helicopter blades.

The FBI agent immediately saw what happened to me and ran towards me, handing me a new sign, just a few seconds before the arrival of my passengers. He gave me quite a look in that moment!

My passengers were four American journalists and although they were very famous, I honestly don’t remember their names. Everybody was on board in just a few seconds.

The two presidential limousines moved quickly, escorted very closely by a gigantic American pick up with several fully armed marines as well as a couple of machine guns installed in the rear, ready to shoot.

The pressure was sky high, everybody was focused and we moved slowly like only one vehicle, just as planned.
Italian Carabinieri and Guardia di Finanza were ahead of us, stopping any car that was not yet blocked at all the intersections.

Moreover, a police helicopter was flying over our heads to control the situation at 360 degrees… I’ve never felt so protected in all my life!
When we arrived at the G8 meeting site, the barracks of the local Guardia di Finanza, we dropped off all the passengers and we breathed a sigh of relief.

Here they accommodated all the delegations for each country and each delegation was assigned a building with rooms for the President and staff and of course their bodyguards, which were many.

At that point, we did not have too much to do, still we could not leave the site while the conference was taking place.
Walking around I realized the importance of the event, in fact, I saw all the most influential heads of state in the world in just a few hours!
On the same afternoon, before the conference started, all the heads of state took part in a group picture.

Obama was the last to arrive on stage for the shot, but as soon as he got into position a natural clap started from the few spectators and the other presidents.
On the same day, at sunset, we saw a new guest’s arrival: General Gheddafi. Although he was not part of the G8 group, the famous dictator of Libya was invited as a special guest to find a political solution to the issues facing North Africa.

This event took place not long before the dramatic events of the Arab Spring that led to his death.
He was a very charismatic and eccentric man, in fact, he didn’t show up alone but brought as his bodyguards 300 women.

The Amazonians was this battalion’s name and it was made up of women chosen from among the most beautiful and he loved to have them accompany him everywhere.
Although they wore a uniform, the women seemed to me like a sort of personal harem!

The most interesting part of his visit was that instead of staying in one of the buildings, he preferred his super comfortable tent which he brought with him from home.

It was explained that even at home, he moved around like a nomad to avoid being localized, camping in this tent to avoid possible attacks.
The day ended and finally we were authorized to return to our hotel.

While we were getting into our vehicles, the FBI officers said we could not move the cars for security reasons and they demanded the cars remain under their direct control.

Basically, they were worried about bombs being placed into or under the cars while we were at our hotel without surveillance, so we all returned to our hotel in just a few vans. 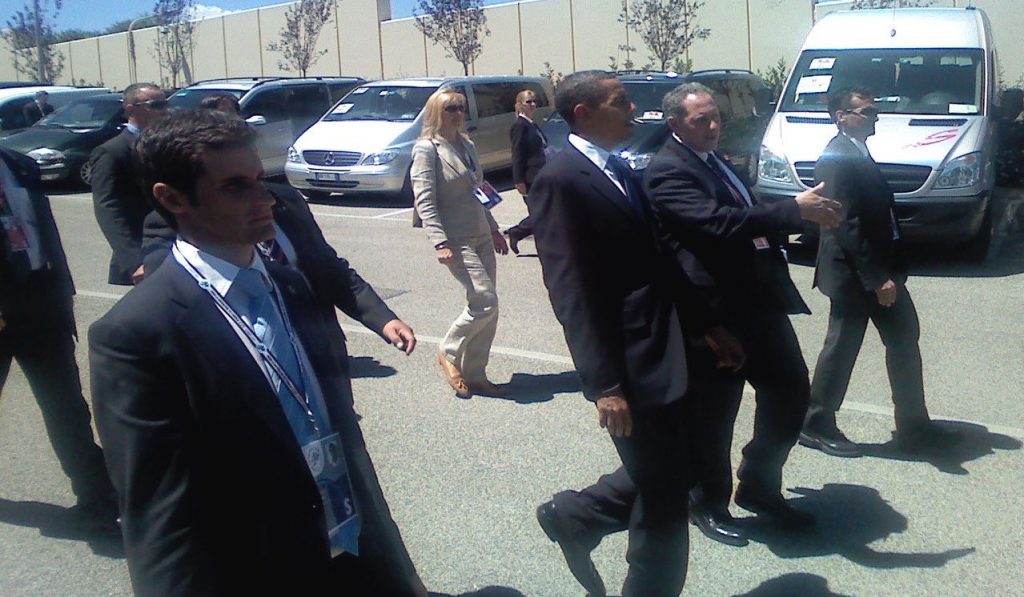 The next day, when we arrived at the site again using the same vans, a few FBI officers came to check them as soon as we arrived at the gate.
They had a sort of electronic device able to “smell” any explosives in the vehicle, still, after this first check, they opened the engine hood, checking more in depth, while another officer slipped under the van with the help of a mirror to look for any bombs.

When he got back out from under the vehicle, his nice suit was trashed, but he didn’t seem too concerned.
This is the incredible level of security used by the Americans and the same kind of process is still in use every time a car enters the US Embassy gates in Rome.

On this second day of the conference, the program was relatively light, but we had another task assigned to us: the American President had requested to visit the devastated red zone of L’Aquila.

In the afternoon, after the conference, we formed a smaller motorcade to provide a tour for Obama and some journalists.
Obama must certainly have been very shocked by the scenes he saw that day because afterwards the American government made a large donation to help rebuild the city.

The third and final day of the conference came.

We were all busy organizing the return of the motorcade to the small L’Aquila airport, when something unexpected happened just an hour before the scheduled departure: the American President requested to meet the drivers and security team that had been assigned to him in the last 3 days.
We were all so honored to actually meet him! He came and shook our hands one by one, humbly saying, “Thank you very much, I appreciate it.”
What a thrilling experience and even a small lesson learned: never underestimate even the smallest detail, like following procedure for taping a sign into the window, it can turn out to be important!