The Appian Way – the most famous road in Rome

The Appian Way is the most famous Roman road and was so well constructed that it was nicknamed the “Regina Viarum” or “Queen of the roads”. In fact, the ancient Romans were true masters in the construction of roads and masonry in general, which is the reason that still today we can admire so many monuments and structures from that period. For example, the original Appian Way road is still open to use in some places!

The history of the Appian Way

Construction of the Appian Way began in 312 BC for military purposes. In that century, Rome was at war with the Samnites, a southern Italian people, who had been putting up quite a fight. At the time, Rome was still a Republic and Appius Claudius entered the office of Censor and began the construction of this huge road as a military supply route. The name Appia comes from his name.

The road started at Porta Capena which is located at the South-East side of the famous Circus Maximus, then crossed the Roman Castles area, the marshy Pontinia area, then Fondi, Minturn, all the way to Capua in the first 132 miles. Immediately after they built the road, the Roman army began to defeat their enemies easily because they were able to refresh troops and equipment in a very short period of time. Rome went on to conquer the rest of southern Italy, all the way to the end of the peninsula, requiring them to continue to extend the road. Five hundred years after the start of the construction, in the 2nd Century, the giant work was completed in the town of Brindisi, 366 miles from Rome. Brindisi was important because it connected the Roman Empire to the Greek Peninsula by way of the Adriatic Sea.

Reading the ancient manuscripts, we realize just how ambitious this project was. The road was carefully planned and built as straight as an arrow, building bridges and digging out tunnels to keep it straight. Mediterranean pine trees, also called umbrella pines because of their particular shape, were planted all along the roadside to provide shade to the ancient travelers. In that age, in fact, most of the travelers were not rich and therefore used their road as pedestrians; only the rich were able to ride horses or drive their carriages or chariots pulled by animals.

The road brought other interesting developments, including two types of horse-changing stations. The first were simply places for changing out horses, therefore primarily a stable, and were located 5/7 miles from each other. The second were more developed structures where it was possible to eat and sleep and were located at a distance of 30/40 miles from each other. As you see, this was very similar to our modern highway system.

Another interesting feature along the Appian Way was the introduction for the first time in history of milestones, invented by Gaio Gracco in 123 BC, for marking the distance traveled. These milestones were columns named “Miliarium” in Latin, informing the traveler about the distance from Rome or from the main city. In 20 BC, the Emperor Augustus commissioned a gilded bronze column named the “Miliarum Aureum” or Golden Mile, located in the Roman Forum, in order to represent the mile 0. From that time on, all distances from Rome were measured from that point creating the saying “all roads lead to Rome”.

How the Romans built roads

The ancient Roman road builders created and used advanced techniques and principles which are still being used today to create roads, although with much more modern tools. After creating parallel trenches, they dug down into the soil for 1.5 meters and then filled with layers of large stones, sand and concrete with the last layer being the famous basalt stone (local volcanic stone). This last layer was filled in with concrete to create a flat surface.

Some of the stones fit so perfectly together that you couldn’t insert a knife between them. The road was higher in the middle and lower on the sides (for water to run off) and there were ditches on either side protected by retaining walls. The standard width of the road was 4/6 meters, but when possible it could be as wide as 10 meters or more.

Stories and legends along the Appian Way 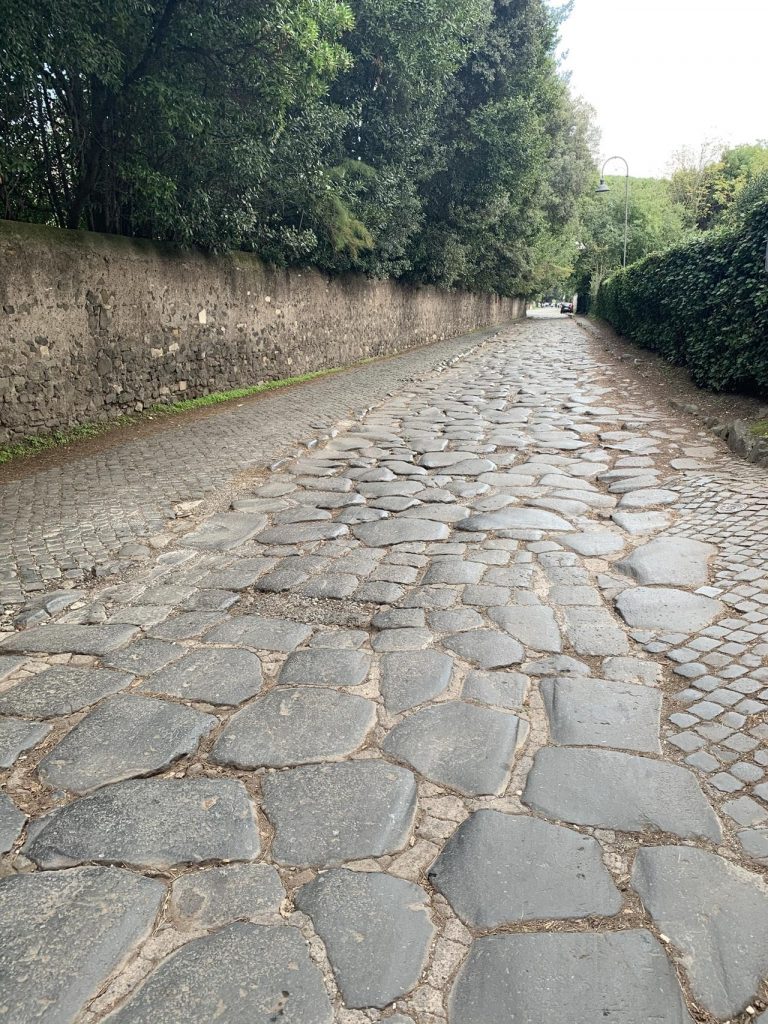 One of the most famous stories about the Appian Way is that of Spartacus, a gladiator who led a slave revolt in Rome (known as the Third Servile War). Gladiators were slaves coming from all over, for example Spartacus was a Thracian prisoner. After the revolt, Spartacus amassed an army of around 120,000 soldiers, posing a huge threat for the Roman Senate.

However the Roman legions were too strong even for the invincible Spartacus and in 71 BC his army was defeated. Spartacus was executed in the same way of all non-Roman citizens, by crucifixion. So for Spartacus and his remaining comrades who had survived the last battle, some 6000 crosses were lined up along the Appian Way for their execution.

In another legend, in 1st Century AD Christians were still being persecuted by the Roman Empire. Peter the Apostle, after the death of Jesus and following his teachings, began a pilgrimage to Rome. He traveled from the Middle East through Corinth, a Greek city, professing the Christian religion along the way. When he arrived to Rome it was in 54 AD and Nero was the emperor.

Nero persecuted the Christians, so Peter was in grave danger and decided to leave Rome. While he fled the city along the Appian Way, just outside of Rome, Peter was met with a vision of Jesus. He was stunned and asked him: “Quo Vadis?” which means “Where are you going?” and Jesus replied: “I’m going to Rome to be crucified again”. Peter understood the message and found the courage to continue his mission by returning to the city, where he was subsequently arrested and crucified upside down.

The reason for his being placed upside down was that he did not feel worthy to be crucified in the same manner as Jesus and so he requested it himself. The next time you come to visit Rome, I will take you to the Appian Way to the Domine Quo Vadis Church located on the spot where Peter had his vision. This church also has the preserved footprints of Jesus in basalt stone.

Possible tours and stops to discover the Appian Way

There is so much to see along the Appian Way, and I would be thrilled to take you on a half day or full day tour to discover its secrets. Departing from the Rome city center, I can take you by the Aventino and Palatino hills, then through Porta Capena, the beginning of the Regina Viarium, and to admire the Caracalla baths.

We can go along the straight road between huge walls to reach a gate named St. Sebastian, the southern gate of Rome. There are lots of great photo opportunities including a stop at the Circus Maximus, St. Sebastian gate, Quo Vadis and  Massentium Villa. Time for a little tour or walk around works perfectly at the St. Callixtus catacombs (1 hour), Cecilia Metella mausoleum and the Appio Claudio Aqueduct wall.