Differences between Pecorino and Parmesan and which one to choose correctly

Foreign tourists who come to Italy to visit Rome and other cities rich in history and culture do not miss the opportunity to taste the flavors of the Italian culinary tradition.

Among the typical dishes of Mediterranean cuisine, pasta stands out, known and loved all over the world, with its various condiments, where a grated cheese is never missing.

During our tours in Rome and Italy, you will have the opportunity to taste different kinds of grated cheese on pasta: Pecorino Romano, Parmigiano Reggiano and Grana Padano are the most used and famous.

Often people have not idea about their differences that, for Italians instead, are very important, so we will try to give you some information about them. 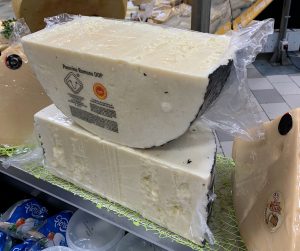 Pecorino Romano DOP (Protected Designation of Origin) is produced only from fresh sheep milk coming from flocks raised in the wild and fed on natural pastures from central Italy like the Lazio region, Maremma up to Grosseto and Sardinia.

The Pecorino Romano cheese has an intense and spicy aromatic taste, which is declined according to the degree of maturation, slightly spicy and savory for the one 5 months aging, to spicy intense for the ones aged at least for 8 months.

It is the less noble and less known between cheeses, considered poor food for being produced by the shepherds since the ancient times, in fact, it’s reported that the Ancient Roman soldiers were fed with a daily ration of 27 grams of Pecorino Romano cheese.

Pecorino Romano should not be confused with the Tuscan Pecorino cheese, which you can taste during our food and wine tours in Tuscany, especially in Pienza where the famous Pienza’s Pecorino is produced, an excellent cheese to be enjoyed at the table together with a good red wine, different from Pecorino Romano which is a perfect semi-hard to be grated. 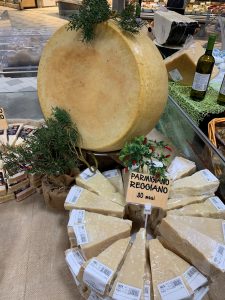 The Parmigiano Reggiano DOP is being considered the excellence of the Italian cheeses, listed at the top in the sales among the best Italian gastronomic product.

This cheese is produced exclusively with milk of a special breed of a cow named Frisian, with a typical black and white cloak, from pastures located in the provinces of Parma, Reggio Emilia and Modena, in the part of Mantova to the right of the Po river and in the part of Bologna to the left of the Reno river, all cities of Emilia Romagna region.

Hence the name of this cheese: Parma is the root of the word “Parmigiano” while Reggiano means “from Reggio Emilia”.

Its production history dates back to the twelfth century, made first by the Benedictine and Cistercian monasteries located in that area.

Abroad the Italian sounding “Parmesan” is used to distinguish both Parmigiano Reggiano and Grana Padano, causing confusion and thinking that they are the same, but this is not the case.

Both are long-aged hard cheeses and DOP specialties, but Parmigiano Reggiano contains no additives and it is naturally lactose free, unlike Grana Padano which uses a protein called Lysozyme to control fermentation.

Among the numerous differences, the following are highlighted: the type of forage used for the cows, the constraints of milk collection and the storage temperature, the maturing of the cheese pieces, the whey used.

Finally, but very important, the production area of ​​Grana Padano is much wider, in fact it can be produced by farms in 33 provinces between Lombardia, Veneto, Piedmont, Emilia-Romagna and Trentino Alto Adige (limited to the province of Trento and some areas of Bolzano).

Parmigiano Reggiano aged from 12 to 20 months has a milky flavor and generally sweeter on the palate, while the more seasoned from 30 months upwards becomes saltier and more decisive with notes of spices and dried fruit.

Grana Padano, on the other hand, has a butterier and more melting taste, often used to season broth and boiled vegetables.

When using Parmesan cheese or Pecorino?

First, let me say that you can use both at any time, on pasta or as snacks paired with a glass of good wine, but for Italians, it’s a must use the Parmesan cheese on the red sauce, or why not on a Caesar salad or pizza.

Pecorino Romano is instead preferred over pasta without tomato sauce such as Carbonara, Cacio e Pepe, Gricia and other typical Roman recipes.

Moreover, according to an ancient Roman tradition, every May 1st, people usually eat Pecorino Romano cheese and fava beans strictly in a picnic.

Anyhow, never grate any cheese on pasta with fish!

Enrico, great chef and my friend, met during my tours, revealed me a secret: he mixes Pecorino Romano and Parmesan to cook the best Cacio e Pepe.

I have tried this way too and I can assure you that I agree with him, my client and friend Hiro can witness it!

If you want to taste these special Italian cheeses such as Pecorino Romano and Parmigiano Reggiano, the best choice is to book one of our food and wine tours!

If you have a specific request in mind for a personalized guided tour, don’t hesitate to contact us by the form! We will create a tailor-made tour for you!