If you want to spend a day off the beaten path during your stay in Rome, I suggest a full day tour in Ciociaria, visiting Fumone Castle, replete with ghost stories and murder mysteries.

You could add a nice wine tasting with lunch and, why not, a visit to the striking Anagni Romanesque Cathedral. 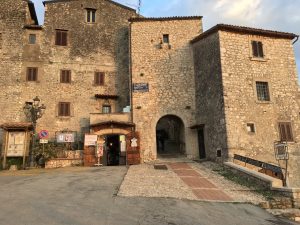 Fumone Castle is about an hour drive south of Rome, between Anagni and Fiuggi. It was built on a hilltop at an altitude of 800 mt and dates back to the Samnite wars of ancient Roman times.

This area, known in modern times as Ciociaria, is in the Frosinone province and was historically considered a geographical buffer, separating Rome from the south of Italy.

Because of this, the castle has always had significant strategic importance. Located at the center of a military fort, its elevated position among surrounding valleys played a key role in alerting Rome and nearby cities to impending dangers.

In fact, the name “Fumone” (literally “big smoke” in English) derives from the smoke signals they would use from the castle to communicate to nearby cities. 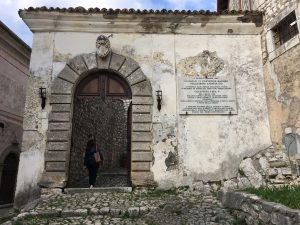 Given its long role of defense dating back to ancient Roman times, the castle is known for its many bloody and tragic stories, the most crucial of which was without a doubt the death of the imprisoned Pope Celestine V.

Celestine, elected Pope at the age of 86 in 1295, is known as the first Pope in history to ever resign from office. Pope Benedict XVI, as you may remember, was only the second Pope to ever leave office; which he did in 2013.

Celestine V was considered a holy man. In fact, that is why, after 30 months of papal conclave, he was chosen as Pope. When he wouldn’t accept the Church’s sordid affairs, however, his election was later considered a mistake.

Throughout the centuries, the castle was widely known as a papal prison and Celestine V’s successor, Boniface VIII, imprisoned poor Celestine V in the Fumone Castle in order to retain sole power as Pope.

Celestine V survived for only 10 months as a prisoner before dying in his tiny cell under miserable conditions. Officially, he died of natural causes but, according to legend, it is very probable that Pope Boniface VIII had had him poisoned.

Centuries later, the castle lost importance until 1584 when Pope Sixtus V decided to entrust the Marquis Longhi with the castle, selling it to him and entitling him as its Lord in order to preserve it.

Since that time, this family still owns the castle which has been passed down through generations; the present-day owner, in fact, is still the Marquis Longhi-De Paolis.

In the 1800’s, the Fumone castle gained notoriety yet again for another tragic event that still has the ability to frighten people as they move throughout the castle. 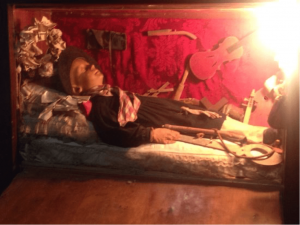 Francesco Longhi, only two-and-a-half years old, was the sole male descendent of Longhi family at the time.

His seven sisters, jealous of what would be his generous family inheritance, slowly poisoned him by mixing small shards of glass into his meals each day.

When he eventually succumbed, his desperate and heartbroken mother Emilia Caetani decided to embalm his body.

In one of the castle rooms along the guided tour, you can still see his small body preserved in a glass box.

Since his death, visitors insist they can still hear the young, unfortunate child’s voice echo through the halls.

After visiting the basement which includes the kitchen and storage rooms, you’ll arrive at the upper part of the structure outside, where you’ll find a garden and breathtaking 360 degree views. 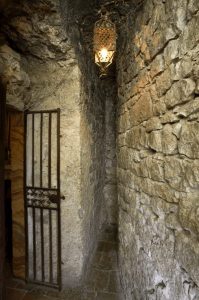 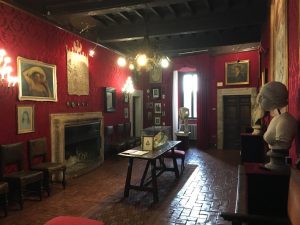 Some tours of ours