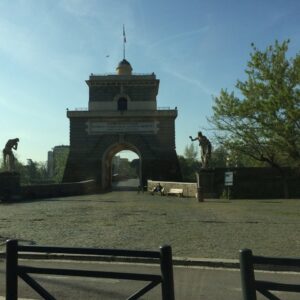 Nowadays the Milvian Bridge is considered one of the most famous of the movida’s places of Rome, but in the past it was place of a battle.

The battle of Milvian Bridge

The battle fought at Milvian Bridge on October 28th, 312, outside Rome was a crucial moment in a civil war that ended with Constantine I as sole ruler of the Roman Empire and Christianity established as the empire’s official religion.

Constantine’s conversion to the Cross may have been prompted by a dream of victory.

A very famous and quite modern custom is of throwing in the Tiber river the locks’ keys on which lovers use to write theirs names, believing that this wish makes their love eternal as same as the eternal city.

Therefore, I wish to those of you are feeling in love, to come to Rome and make at least a try!