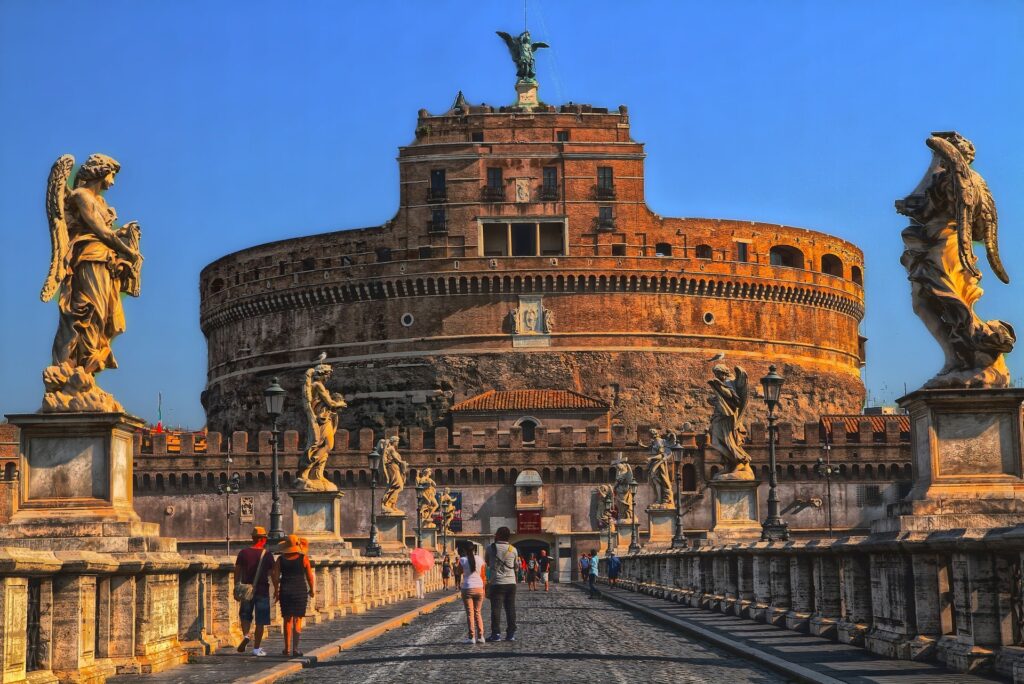 Located just a few hundred meters from the St. Peters’ Basilica and known as the Vatican castle, St. Angelo Castle was the last defensive line of Popes.

For Opera lovers, it is known that St. Angelo Castle was the main set of Tosca, one of Puccini’s most famous masterpieces.

The origin of the Castle

This huge construction was built many centuries earlier as the Mausoleum of Hadrian, one of the most famous Roman emperors. Hadrian built this cylindrical structure in the year 134 AD, so much big to become the largest mausoleum ever built in Rome.

During that age all VIPs’ were usually buried in mausoleums whose dimensions were depending on the family’s power and richness, in fact the more people were rich and the more their tombs were bigger.

Generally, all the emperors, were using to build mausoleums-tombs in a such great way with the aim of leaving good memories of their self with the construction of huge monuments and impressive sites; just think about the Colosseum, the Roman Forum, the Palatine hill, huge roads and so on…

St. Angel Castle became part of the defensive system of Rome already since the construction of the Aurelian walls, but only in the XIV Century Pope Niccolò III decided to convert the previous fortress as the Vatican castle due the vicinity to St. Peters’ Basilica and the Vatican Palace.

During the XIV Century Pope Niccolò III had it built a big wall called Passetto di Borgo in order to connect the the Vatican castle with the Vatican Palace.

In the wall there’s a famous passage located in the upper part of it, which is a sort of indoor corridor, used to walk in security from the Vatican to the Castle and vice versa.

There’s a famous story about this corridor! On May 6th, 1527, during the sack of Rome, Pope Clement VII got his life safe, running away through the same corridor chased by the “Landsknecht”, mercenary troops belonging to Charles V.

Pope Clement VII in fact got safe only thanking the heroical sacrifice of the 189 Swiss guards, in order to permit to the 40 of them survived to escort him into the castle.

The other 149 instead were slaughtered, choosing to die to hold their position; this is probably the big reason why, the Papacy it’s so grateful to these Swiss guards, that they are still nowadays the official Pope private bodyguards.

At the modern time we had several recalls of this wall and the Castle, for example Dan Brown in his best-seller Angels and Demons describes the same corridor as same as an underground passage. This is clearly a fake, because the corridor isn’t underground, but the author replied that his book was not a history book but only fiction.

When you’ll come to visit Rome then, wishing to visit this beautiful monument I suggest you to come from the left bank of the river, in order to approach the St. Angel Castle to the front side, therefore you will need to cross the beautiful pedestrian bridge nowadays named St. Angelo Bridge.

This bridge in fact was built in the 134 AD by Hadrian, to connect the ancient Rome to the mausoleum area and originally was named the Aelio bridge.

In the year 1667 Bernini and its pupils erected at both sides’ lines of statues representing 10 angels in order to realize a scenic entrance to the castle.

Anyway, while you are proceeding along the bridge admiring those statues, if you rise your sight at the top of the castle you will notice a big Angel statue topping the whole castle.

The reason of the Angel statue is coming from a legend dating back to the 590. In fact, it seems that while a procession conducted by Pope Gregory I towards to the tomb of Hadrian, on the castle’s top of appeared the Archangel Michael in the act of sheathing the sword as the announcement of the end of the plague, which happened actually.

That’s the reason why since that “miracle” the castle name was modified in St. Angel Castle.

Anyway, this is in brief the history of just one of the numerous jewels of Rome, if you want to come to discover more in depth the St. Angel Castle and the whole Rome, please book with us.