The Hole of Rome 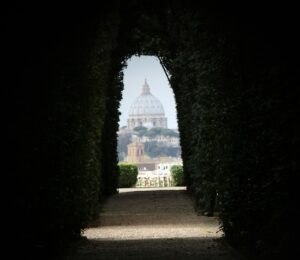 Have you ever heard of the hole of Rome? This is one of the many curiosities of Rome, that became famous in the world, also thanks to the film Roman holidays (1954).

I highly recommend to all of you who want to visit Rome to watch this film, in fact there’s a scene among many, which has made this place full of history and charm, really unique and unmissable.

In one of the scenes, Gregory Peck acting the main character, accompanies a charming princess played superbly by Audrey Hepburn, along a tour of Rome aboard a Vespa, in order to show her the view of St. Peter’s church overwhelmed by the garden arched decorations inside the property, in a perspective that due of an optical effect, gives the feeling of being able to almost touch the grandiose Dome of St. Peter’s church which is actually 3 km away.

How you can recognize the Hole of Rome?

You can recognize it simply because normally there are always people in line who do not want to miss the chance to look inside the so-called “hole of Rome” in a patient waiting for their turn to be able then, to take a photo that will bring them as an indelible memory.

Just go up on the Aventine Hill passing through the municipal rose garden, the Oranges’ Garden, and beautiful medieval churches to get to this key-set part of an old door belonging to the property of the Priory of the Knights of Malta just on the homonymous Piazza dei Cavalieri di Malta, restored by Giovanni Battista Piranesi in the second half of the 1700s.

The villa is very old, in fact it is located on the area that was a Benedictine monastery founded in 939 that passed to the Templars in the twelfth century and in 1400 Pope Paul II granted it to the Sovereign Military Order of Malta.

The square redesigned by Piranesi, rectangular in shape, is rich in decorations made by religious and esoteric symbols that lead back to the history of the Knights of Malta, successors of the Templars, gives the visitor an atmosphere of beauty but also mystery…

The entire hill still appears immersed in a magical atmosphere, embellished by elegant houses, so much that it is not a coincidence that I love to define the entire hill as the Beverly Hills of Rome, known to the Romans simply as Aventine, certainly the most beautiful and prestigious district within the walls of the eternal city.