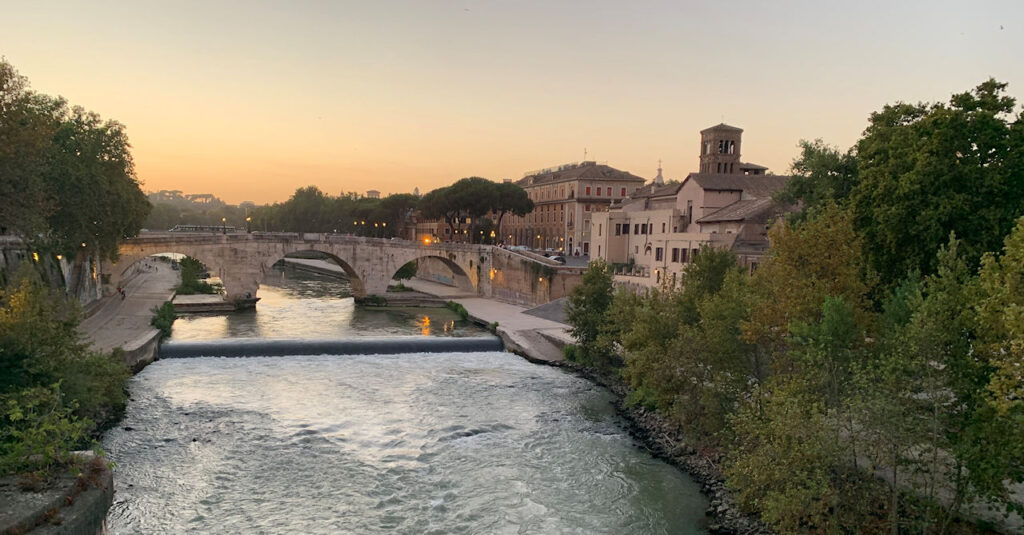 The Tiber Island, located on the Tiber river, it’s the connection through the bridges Ponte Fabricio, the only original bridge in Rome, and Ponte Cestio, of which only some parts are still original, to Trastevere neighborhood, which is located instead on right bank of the river.

Trastevere nowadays it’s representing one of the most popular districts of Rome due the so many renowned restaurants that are recalling crowds of people every night.

In the antiquity Trastevere was just part of the countryside because the whole area located along of the Tiber right bank was outside of the city limits until the late Imperial age.

In the island, which is shaped as same as a ship, you can discover the ancient temple of Asclepius the Greek Medicine God dating back to the 3rd century BC, that’s why the same island is associated with medicine and it’s not a case that The Fatebenefratelli Hospital, the oldest of Rome, was founded in the same island in the 16th century.

Of course, you can’t miss also a Christian church such as the St. Bartholomew church dating from the 10th century.

During the Summer the Island use to be the site of the Rome Summer Festival, where people use to stroll along the both banks looking for the fresh air due the presence of the water.

Moreover, they can stop at the numerous craftsmen stands or just sit at one of the not permanent restaurants and pizzerias to enjoy the cool atmosphere of the roman nights…

If you choose to visit Rome, don’t miss the opportunity to visit the Tiber Island and Trastevere!